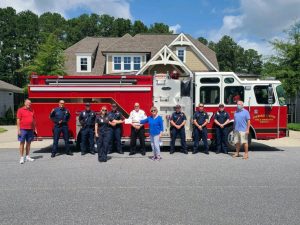 Due to the unusual climate brought on by COVID-19, the annual Give Burns the Boot Campaign traditionally held at intersections and storefronts just wasn’t a viable option for the Georgia Firefighters Burn Foundation (GFBF) this year.  After all, the safety of those we serve, our partners, volunteers and staff is always a priority. So adjustments were made and new strategies were brainstormed which led to fire departments throughout the state hosting virtual boot drives in support of GFBF program service offerings.

Through October, Cherokee County Fire Department led the state on the online giving site giveburnstheboot.org.  Elizabeth Elder, boot drive coordinator for the department, contributes a number of things to the success of their virtual boot drive:

Getting the Word Out:

Elizabeth also says they’re still trying to put together a Cooking with a Firefighter Cookbook to help raise money as well.  When the department exceeded their initial pre-set goal this October, they decided to increase their target goal and they’re still going strong with donations coming in daily!  To make a donation through Cherokee County Fire Department’s virtual boot drive or for a listing of other fire departments, visit giveburnstheboot.org.